Zia Langove to lead commission about security of Hazara community

Zia Langove to lead commission about security of Hazara community

“The commission shall examine the security scenario of Hazara community and chalk out a comprehensive security plan for highways”, a notification issued by the Home Department said.

The commission would also evolve a strategy for the security of the Hazara coal miners. It would also prepare recommendations to address the grievances of the community regarding national identity cards and passport issues.

The commission would suggest the creation of jobs for the legal heirs of Mach coal miners brutally murdered earlier this year, the notification said. The provincial government also review the pace of compensation and the issue of missing persons in the community, it concluded. 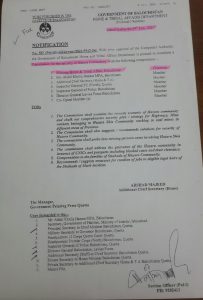 Militants have repeatedly targeted the ethnic Shia Hazara community in Quetta during last two decades. Sunni militant group Lashkar e Jhangvi has claimed the responsibility for the attacks against the Hazara community.

Balochistan government has already devised a special security plan for the protection of Hazara community after terror attacks. The community lives in Quetta’s Marriabad and Hazara town areas.

On January 10, 2013, twin suicide bombers blew themselves up in Quetta’s Marriabad area killing over 100 members of the Hazara community. The Pakistan Peoples Party (PPP) federal government removed its own chief minister Nawab Muhammad  Aslam Raisani and imposed governor’s rule. However, this incident was followed by another deadly bombing in Hazara town area of Quetta killing more than 100 people.