Quetta: Interesting phrases between CM and Speaker over faulty mic

Repairing mic is the responsibility of the assembly secretariat rather than government: Jam Kamal

Quetta: Interesting phrases between CM and Speaker over faulty mic

Interesting phrases exchanged between chief minister Balochistan, Jam Kamal Khan and Speaker Qudoos Bizenjo on Saturday over the issue of turning off the mic. “You are commenting over three years performance, but this is the condition of the mic”, Speaker Bizenjo told CM.

“Repairing mic is not the responsibility of the government rather it is yours”, the CM responded. Jam Kamal Khan was about to speak about the performance of the government and ongoing development activities when suddenly the mic went off.

“Purchase mic from bazar instead of waiting”, CM Balochistan

Despite repeated attempts, the assembly staff was unable to on the mic. “We have written a letter to the communication and works department”, Speaker Bizenjo mentioned. “Do not wait for C&W and purchase it from the market”, the CM replied. 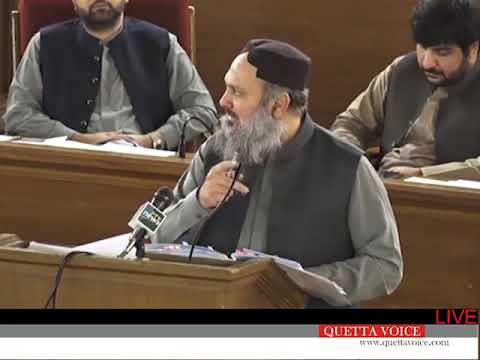 “This is not only an issue of the mic rather the whole system needs repair”, Bizenjo added. On and off, the mic did not work properly during the speech of chief minister Balochistan.