June 18, a black day in the parliamentary history of Balochistan: Jam Kamal

June 18, a black day in the parliamentary history of Balochistan: Jam Kamal

Jam Kamal was speaking to reporters outside the house on Monday evening. Senator Anwar ul Haq Kakar and other provincial ministers were also present on the occasion.

He mentioned that since the leaders of the opposition political parties always speak about sanctity and supremacy of parliament, therefore, they should apologize. Jam Kamal reiterated that police defended the assembly rather than attacking any opposition lawmakers. 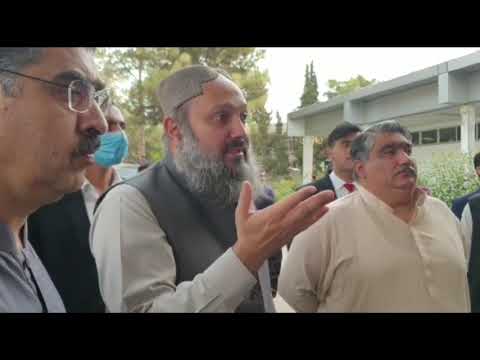 CM Balochistan’s remarks have come after 17 opposition legislators offered voluntary arrests at Bijli road police station. Police had lodged FIR against the opposition lawmakers for violating the law during a protest on June 18. The charge vehemently denied by the opposition.

“Come in the house and debate over the issues”, CM Jam Kamal

Jam Kamal urged the opposition to come in the house and protest rather than agitating on roads. “Pinpoint our weaknesses inside the house”, the CM added.

Ugly scenes within the premises of the Balochistan Assembly made headlines in national and regional media. “This was embarrassing for all of us”, Nawabzada Gohram Bugti, the adviser to the CM on local government said.