Chief of the employees grand alliance, Abdul Malik Kakar and others addressed a crowded press conference

Balochistan Employees and Workers Grand Alliance (BEWGA) has announced to lay siege to the Balochistan Assembly session on the eve of the budget session. The provincial government has decided to present the budget for the financial year 2021-2022 on June 18.

“I appeal all government employees to reach Quetta on June 18”, Abdul Malik Kakar, the Chief of BEWGA told a crowded press conference on Wednesday. Dad Muhammad Baloch, Professor Hameed Khan and others were also present on the occasion.

Government fails to translate its words into action: Kakar

Mr. Kakar said the government has not translated its words into action when it comes to increasing the salaries of government employees. “We will not tolerate such a discriminatory attitude”, Malik Kakar said. 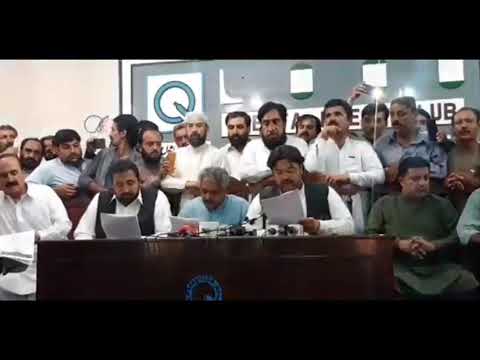 BEWGA held a 12-days long sit-in Quetta in March this year in support of their demands. The employees ended their long sit-in after an order from the Balochistan High Court (BHC). Mr. Kakar reiterated that the Balochistan government should increase the salaries of employees by 25 percent.

When asked about the employees’ salaries, finance minister Balochistan, Zahoor Buledi said the government has made a better decision for employees. Although, he preferred not to disclose the increased percentage.