Chief Minister Balochistan, Jam Kamal Khan on Wednesday said his government has completed 500 old development schemes in the province in a short span of time. The schemes were initiated by past four governments and completed recently, he mentioned in a Tweet. 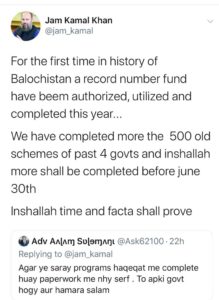 The CM on Twitter responded to queries of people and said that record funds were released and authorized by the government to make sure timely completion of development projects. Jam Kamal said remaining development projects would be completed by June 30th this year, which pave the way for development and prosperity in the province.

The Chief Minister’s tweet has come after the opposition political parties accused the government of delaying tactics in terms of utilization of funds in the province. The charge vehemently denied by the government.

Blast kills 8, injured 110 inside a Madressah in Peshawar Dir Colony

BA adopts resolution against publication of blasphemous caricatures in France